Never Sell IT Services Off A Quote Or Proposal 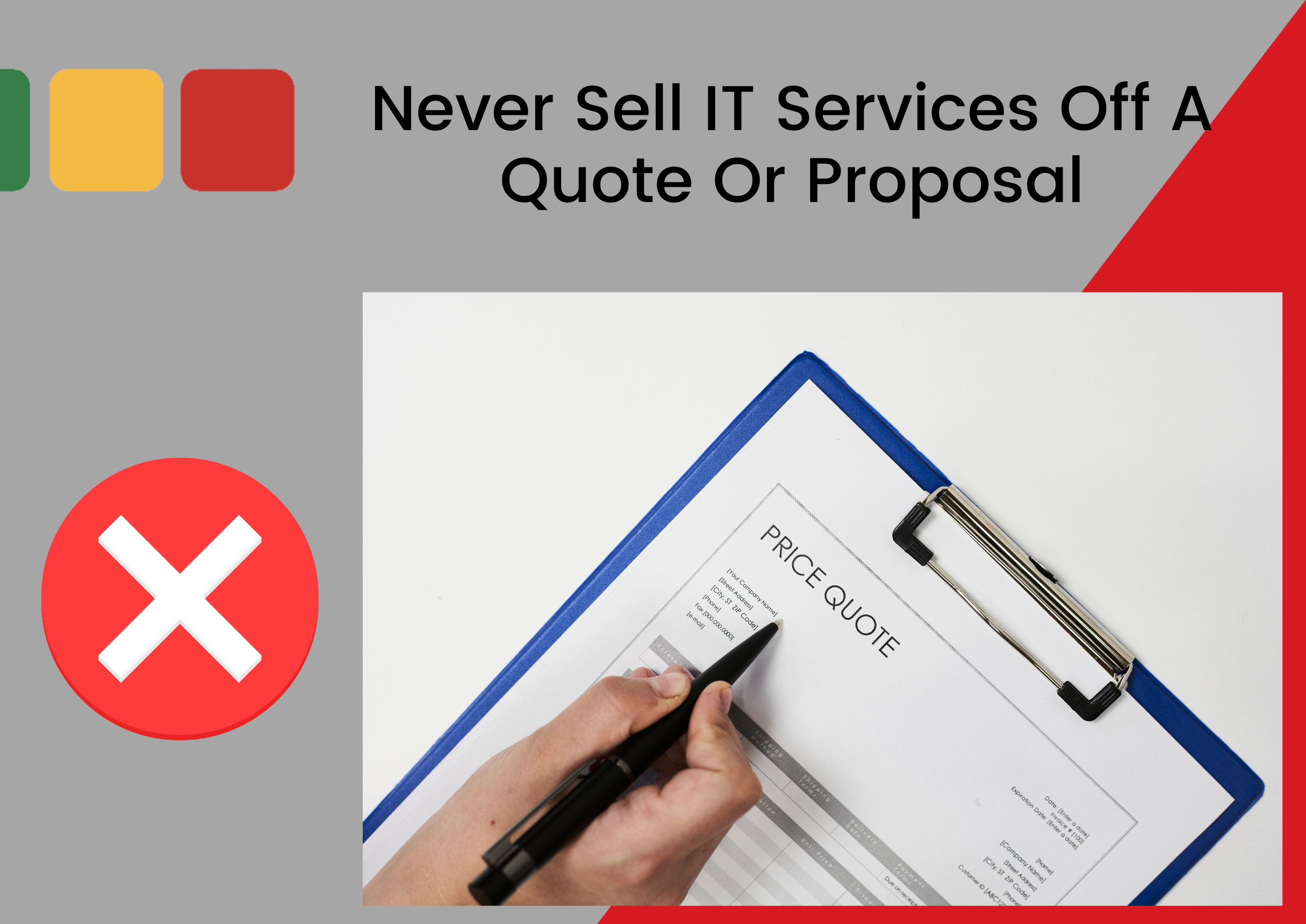 If you’re using a quote or proposal to sell off… Stop. Right. There.

Here’s the only good that comes from selling off a quote or proposal. And it only benefits your prospect in ways you probably don’t want it to:

Here’s why that happens

People always want to buy the best. Your clients are no different.

When you have a prospect, they are hoping you’re the best. If they are looking at other MSPs as well as you, in the end, they will decide who among you is the best.

Now, while everyone, including your prospect wants to buy the best, more often than not, they don’t.

Instead, they buy what they THINK is the best. Sometimes they luck out and the one they think is the best actually is. But most times, it isn’t. 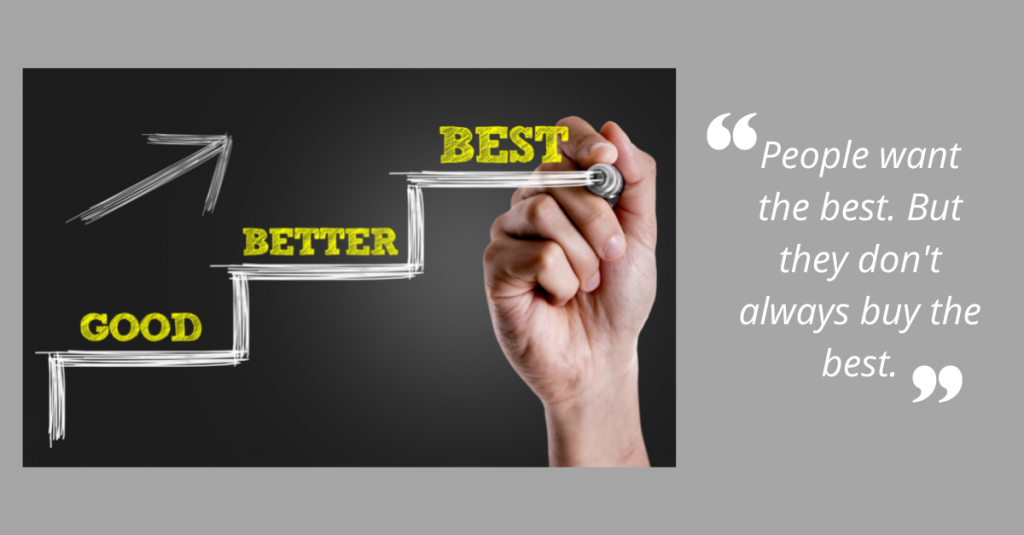 What does win every time is the person or business who communicates their value the best. And that may or may not be the one selling the best service.

If the prospect is confused in any way at all, and is not emotionally invested in your presentation, they won’t see the value and the impact that value can have on them. They will focus only on price.

When you sell off a proposal or quote:

If you’re selling off a quote or proposal, it’s almost guaranteed the prospect is going to be confused, un-engaged and in the end, focused only on price.

Some MSPs think audit is a simple quoting or proposal tool. It’s neither.

audIT is a sales tool period 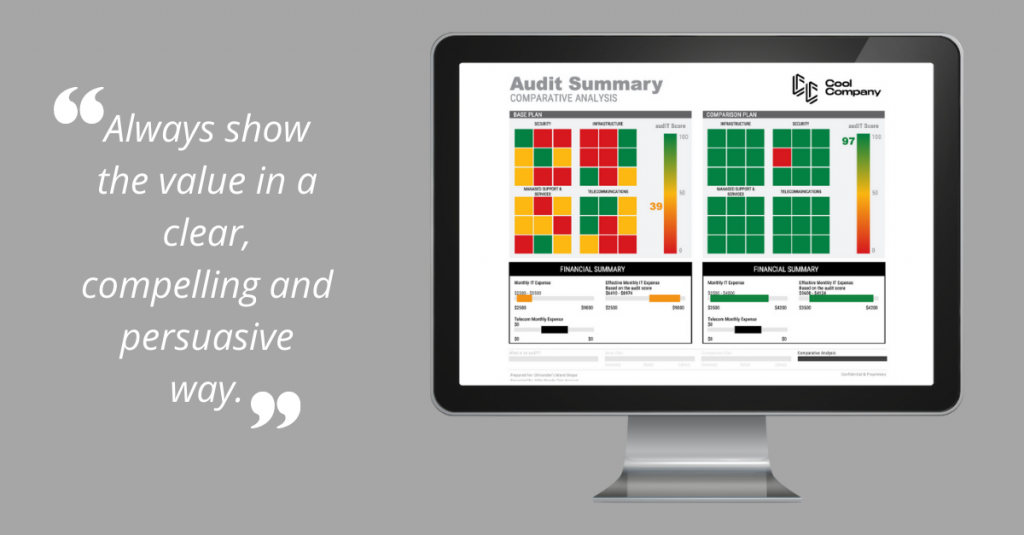 audIT will be what you use to present the findings of your technical assessment in a sales presentation. It is emotional, simple, compelling, persuasive and clearly demonstrates the value in a big way.

Once you close the deal with audIT, then it’s time to use your quoting or proposal tool. But only after they’ve said yes.

And when you schedule a demo and see the process of presenting in a sale or business review, you will see how it is the only choice for thousands of MSPs who are sales and growth minded.

Case Study: Here’s how a local tree company lost my business with a quote

I called a company I saw doing tree work in my neighborhood. I have a bunch of trees that were one thunderstorm away from ending up in my house. So, I was a very motivated buyer.

The gentleman arrived at my house and proceeded to walk around the property. He didn’t knock on the door and if it wasn’t for my Ring alert, I might not have even seen him.

I went outside and noticed a red paint mark on a tree. Then another on another tree. And more. Finally caught up to him about six red painted tree marks later.

He told me he’d finish up and then send me a quote. I was a bit surprised he didn’t ask me any questions like, which trees do you want to keep, which do you want down.

When he finally sent me the quote, guess what I did first? I looked at the price on the bottom. Of course.

And it was probably about five times more then I wanted to spend. Since I saw no value in what he proposed, I decided to do what most buyers do. Nothing. I’ll take my chances with Mother Nature and hope for the best.

Fast forward a year and I asked a landscaper to come in and quote me a price on spring cleanup. When he arrived, he knocked on the door. He proceeded to walk around with me.

He asked me questions about what I didn’t like about my yard and what I wanted it to look like (current state/future state). He listened as I told him what my vision for the yard was.

He asked me about the trees. He noticed red marks on them and alerted me to the fact that his business did trees as well.

Again, he listened. I told him my main concern was simple. Take down anything that could take out my house.

He pointed out that I would only need to remove a third of what was marked to make that happen. I was sold. I asked him for a quote.

Why do MSPs sell off a quote or proposal? 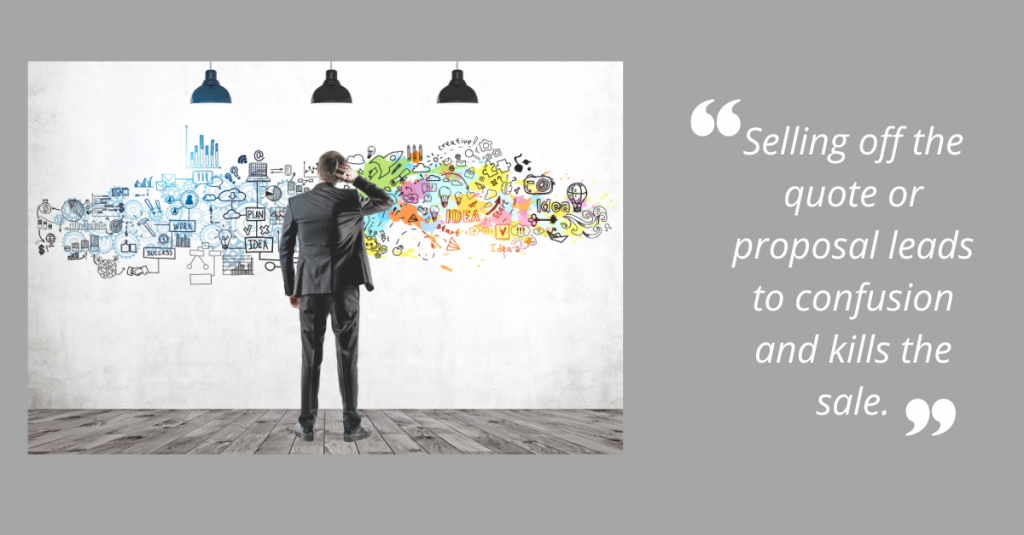 If you’ve read this far, you probably either agree and are already doing a better presentation or you are ready to stop selling off a quote/proposal. You may even be thinking what kind of business would be crazy enough to sell off a quote or proposal? Well, many do.

Here's a few reasons why MSPs sell off the quote?

They don’t know any better

Many MSPs get into business because they're really good at and enjoy technology. So, they start taking on clients. Before long, they've built a business.

As they grow out of being break/fix or being the low priced option, sales gets harder. In the beginning, they may have had a ton of luck selling off the quote.

But as they’ve evolved to sell higher value IT services, the quote or proposal isn’t working. They are losing more sales than they should.

Ideally, they’ve recognized the problem by now and are ready to make a change. So, they go out and learn how to sell IT services better. Maybe they even stumble upon this article.

Sadly, there’s plenty of people out there teaching MSPs and other businesses how to sell… wrong.

There’s quoting and proposal tools in and out of the MSP niche who brand their tool wrongly as a ‘sales tool’. It is not. But they are more concerned with selling their service than helping their users succeed.

These tools are truly an important part of the process. But any company telling you to sell off a quote or proposal is just dead wrong.

Care about speed and efficiency over quality

This one is a killer. These MSPs know better.

Their top concern is doing things as fast as they can. Not devoting too much energy into things like sales is seen as a time saver.

The problem is that sales just takes time. MSPs who want to grow cannot cut corners. All the top MSPs know this.

Hopefully if you’re in this category, you don’t wait until it’s too late to have this paradigm shift. The business who puts the most effort into sales wins.

They don’t have a better process

They may have tried other ways that didn’t work so they default back to what they know. But these MSPs realize how important sales is and that they need to make a change. They just don’t know what that change is… yet.

This one is easy to solve. That’s what audIT was built for.

This is the right time to present the quote

First you sell. You ask and listen. You present what you understand about their needs and show them what it will be if they buy. You keep them engaged and emotionally invested. Then you close the deal.

Only after that should you give them your proposal or quote when ready to move to contract.

Want to see how audIT makes selling easy? Schedule a demo and never lose a deal to inferior competitors again.